What Did We Do on BEAUTIFUL ANTIPAROS?

We hired a moped because having your own transport is a must on Antiparos if you wish to seek out the more remote naturist beaches. I'll explain more in a minute.

We had made our rather hasty retreat from Donoussa and arrived at Parikia, the main port of Paros, in the morning. From there we caught a bus to Pounta about ten minutes away where there is a regular ferry service to Antiparos. It only takes about ten minutes to cross the straight and is very cheap. Having arrived in Kastro, the main town of Antiparos, we decided to have a coffee and some breakfast before looking for somewhere to stay. This was our fourth island and we were carrying a tent, sleeping bags, roll mats and cooking equipment, none of which we had used.

Anyway, after breakfast we strolled southerly through town and on the outskirts we found a clean looking apartment block which had a spare room with a balcony. Perfect. Because we were quite tired we decided against anything too energetic and went for a walk through town. Antiparos has a really relaxing and friendly feel to it and we immediately felt we were going to enjoy our stay here. After lunch we went in search of the island's official naturist beach, one of only three official naturist beaches in the Greek Islands. It wasn't difficult to find as it was only about ten minutes walk from the main centre. On passing 'Camping Beach' we checked out the toilets and showers at the camp site and were glad we had an apartment. I'm sure they will have improved in the last seven years!

Just around the corner was the 'official naturist beach'. Our initial reaction was mixed. The beach was about 50% textile, which surprised us, and quite crowded. We certainly don't mind being on a busy beach if it is totally naturist but this didn't have quite the same feel to it. There are small sand dunes at the back and we tucked away there for a while. The situation of the beach is good with Diplo Island within wading distance, although we decided against that. 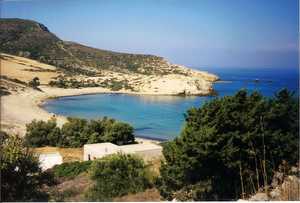 Later that day we walked back to the apartment, slightly disappointed but more determined to find our own secluded beach. That evening, before eating out which again was very cheap and good, we walked through the town to 'Sunset Beach' simply because of the name and time of day. Imagine our surprise when a gunshot suddenly whistled around our ears. I ran to where I thought it had come from, behind a wall, but there was nobody in sight and to this day we don't know where it came from or what they were aiming at. At least it missed us! 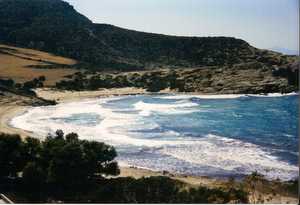 Antiparos is approximately 35 kilometers square with a coastline of about 57 kilometers. For this reason, the next day we decided to hire bicycles and to explore further afield. We noticed a bike hire shop just down the road from us, opposite the windmill, so we sorted that out and set off for the day with plenty of food and water. Having studied our map we could see there was a beach over on the west coast called Livadia but to get there we had to cycle along the south east coast road and then cut across the island. Although it was only about 8 kilometers it was not the easiest of cycles, Antiparos being quite hilly and many of the roads rough. Eventually we arrived and found we had the beach to ourselves. It was beautiful and we spent a really relaxing day there. The next day we returned and, as you can see from the photographs, the wind had picked up a there was some surf. As we enjoy body surfing we had the best of three worlds, a naturist beach, by ourselves and surf. Could life get better? 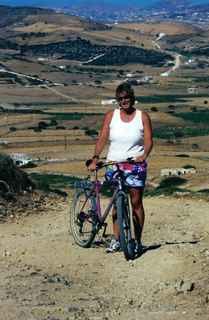 We decided maybe it could and so the next day we set off for a beach further round the west coast called Monastaria. It took us ages to get there and, because the road became gradually worse until it was just a rough dirt track, we were really tired. However, from the top looking down to the beach, excitement took over. We made our way down the track, past a little church and arrived at the beach, again deserted and in beautiful surroundings. This, we decided, was as good as if not better than Livadia. It was just so peaceful and sheltered. The only downside, if there could be one, was that it was so far to cycle. That evening we returned to the bike shop which also hired mopeds. As I had never ridden one this was quite a monumental decision but the lady just gave me a crash helmet and told me to practice in the road outside the shop. I didn't fall off, she told me I was ok, and that was that. During the evening, and certainly before we had a beer, we both 'practiced', for one very good reason. 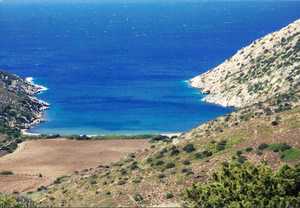 Having looked at the map of Antiparos I decided it was possible to run around the west coast to Livadia beach whilst Jan made her way around on the moped. So, fairly early next morning, I set off getting some quite strange looks from the locals in a little back street. I got even stranger looks a couple of minutes later when I returned having gone the wrong way. However, once I had left Sunset Beach and gone around the headland I was suddenly completely alone. I was able to take off my shorts and run naked for most of the way to Livadia. There were times when there was no path as such but it was obvious which way I had to go and I had no problems. It was brilliant and I would recommend it to anyone enjoying naked rambling bearing in mind you have to get back again. I was lucky because I had Jan waiting for me at Livadia. We then went on the moped around to Monastiria for another superb day. 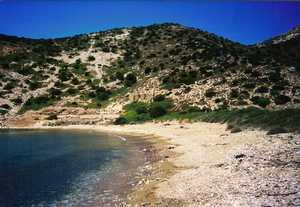 There are other recognised, if not 'official', naturist beaches on Antiparos. This has to be one of the better islands in the Cyclades for naturism. One beach within walking distance of our apartment was Psaralaki 1 although Psaralaki 2 is more reknowned for it's naturist area. One day we rode down to the south end of the island to St.Giorgios. This is a strange area of quite uniform tracks leading off at right angles to each other and looking as if it was going to be developed. However, having looked at Google maps I can't see any great evidence of this at the moment. There were a series of little coves just below a low cliff with one or two naturists dotted around but nothing too definite. During that journey we visited the huge cave on Agios Ioannis hill. This is a must. There have been some dodgy steps built now but the mind boggles at how people climbed into it many years ago. The stalagmites and stalagtites are amazing as are some of the inscriptions left by visitors in the distant past. 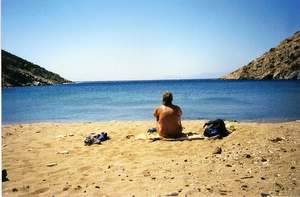 I have to finish this page with the picture of Jan at Monastiria beach because this typifies our lasting memories of Antiparos. Very laid back, seclusion certainly possible, wonderful beaches and an island to which we would like to return in order to further our explorations.


We have received this report from Phil, one of our naturist readers, who stayed at neighbouring Paros in the summer of 2009! This is easily possible for a day trip from Antiparos or perhaps even for a longer stay. The photograph is of the naturist section of Voutakos beach on Paros with Antiparos in the background. 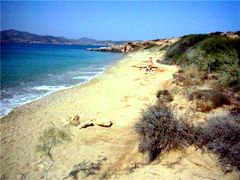 "Interesting reading about AntiParos as I was there in September 09. Went to the naturist beach just outside the town and again a mix of naturists and textiles. Also discovered Livadia and there were only a couple there, just the steep incline to the beach which was not easy on the ATV I had hired for both of us.

We stayed at Aliki in the south of Paros, very quiet, but the best part was a naturist beach at Voutakos only known to locals. A long beach, the first part textile then there is a slight bend, then the naturist beach, both parts private.

Certainly worth a visit and well sheltered from the wind which was always blowing."


Let others know about this site by bookmarking it at your favourite social bookmarking engine: