Possibly the most BEAUTIFUL Cornish Beach! And it's Naturist? 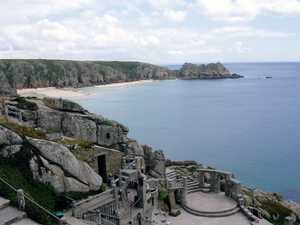 The beach we are going to tell you about is certainly one of the most beautiful on the Cornish coastline, if not much further afield.

I know Jan and I are biased because we lived in this stunning part of the South West peninsular for eight years before moving to France but we think you'll agree with us. 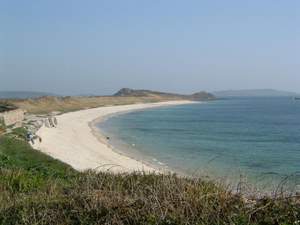 Before we let you know about this beach we would just like to tell you of a group of islands about twenty miles off the Cornish coast called the Isles of Scilly. Jan and I, between us, have been to the Scillies on many occasions and we are now telling you about them, not from a naturist point of view, but because of the serenity and beauty of the islands. 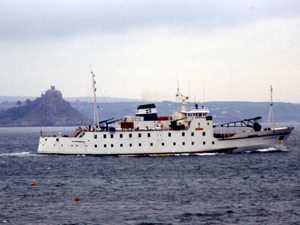 The Scilly Isles consist of five inhabited islands, the main one being St.Mary's where all flights from the mainland arrive. It is possible to catch a helicopter from Penzance, a small plane from Lands End airport, and also a ferry called 'The Scillonian' which sails from Penzance during the summer and docks on St.Mary's. From this you get spectaclar views of the Cornish coastline between Penzance and Lands End. 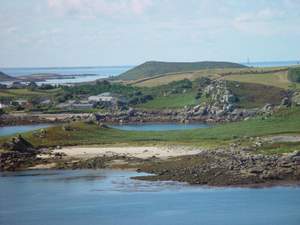 From St.Mary's you can then catch a small ferry to one of the four other islands. Unless you have your own boat or plane these are the only ways that you can reach the Isles of Scilly and, therefore, they never get overcrowded. This also means that, particularly if you go to one of the off islands, there are many quiet spots where it is possible to sunbathe without disturbing anyone (or being disturbed). 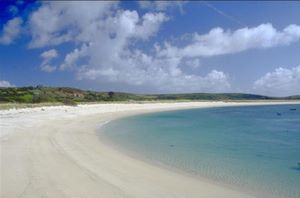 You may want to visit them just for the experience and it is possible to get day returns on all forms of crossing. However if you go by The Scillonian you will only get about five hours of exploring. The plus side of this is that you sail alongside the Cornish coastline from Penzance to Lands End and past our favourite beach. 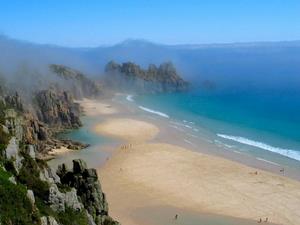 Our favourite beach is at Treen, west of Penzance. To get there you leave Penzance on the A30 in the direction of Lands End. After about three miles you come to Catchall where you turn left on the B3283 to St.Buryan. Go straight through St.Buryan and soon you will go down a very steep hill with a hairpin bend halfway down. As you go up the hill on the other side take the second left into the village of Treen. 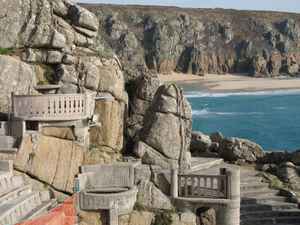 Treen beach, also known as Pedn Vounder, is situated just along the coast from the world famous cliffside Minack Theatre. There are two ways to approach the beach. You can either park in the Porthcurno car park which can sometimes fill during the summer or, probably better, park in the village of Treen. Turn left as you leave the car park and just follow the lane towards the campsite. After about five minutes you will cross the Cornish coastal path. Keep going straight and you will see Pedn down to the left. 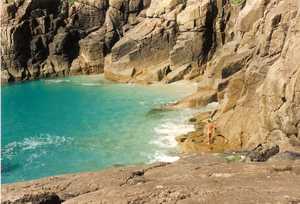 Carry on walking and soon you will see the steep path leading down to the left. The last part down onto the beach is quite steep but just take your time and there will be no problem. The amount of sand can vary from year to year. Sometimes there is a big bank of sand at the back of the beach with a sandbank further out and a lagoon between. That is probably the ideal because at low tide it is possible to walk along the sandbank towards the famous rocking stone, The Logan Rock, perched on the headland.

There is a tiny cove on the Porthcurno side of Pedn which runs out of sand quite quickly as the tide comes in, as you can see from the picture of me climbing down. We haven't been down to Pedn this year but as soon as we do we will give a report on the state of the sand! As with most of the Cornish beaches, take care when you swim and find out tide times to avoid getting cut off. *UPDATE* Jan and I went there yesterday (21st. April 2007) and had a lovely four hours sunbathing. At the moment there is plenty of sand!

*UPDATE2 2014* I (Rog) visited towards end of June. Plenty of sand and still as beautiful as ever. 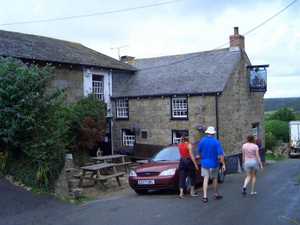 The village of Treen is lovely. There is a shop by the car park where you can get ice creams, pasties, cream teas and other little gifts. Our friends Kevin and Gill run the campsite just along the lane. This is non naturist and is so busy you cannot book in advance. Make sure you say 'hello' from Jan and Rog if you go in the little shop on the site. Just down the hill in Treen is The Logan Rock Inn. Jan and I used to live within walking distance from the beach and this was our local (we had our wedding reception here!). It is a great pub that hasn't changed in character and still has that real 'country pub' feel and it sells great Real Ales including Cornish beers! Say 'hello' to Nick, the landlord, if you go in there. 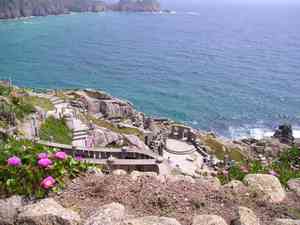 There are so many Cornish tourist attractions that I think we will write another page to cover them. However, within walking distance of Treen, in Porthcurno there is the Minack Theatre and also the Cable and Wireless Museum (Jan's dad shows people around on a Monday in the summer. Say 'Hi!'). It was from here that Marconi laid the first TransAtlantic cable!

You've probably gathered we have an affinity to this area. It is a beautiful part of the Cornish coastline with Pedn being one of our all time favourite beaches. If you should visit here, please let us know your impression of the area. All feedback is useful for us.

A word of advice from a fellow naturist!

Hi there, I decided to visit Pednevounder today for the first time. I took the dog as it's a dog-friendly beach so having parked at Treen, I set off down the footpath, the wrong footpath, the footpath that runs alongside the carpark. I ended up in Penberth!! Then I had to climb the footpath up the cliff, along to Logan Rock and eventually found the path down to the beach. Down we went and were finally met with the last section onto the beach. The dog was panting and I was sweating so, I guess we were both anticipating a swim. However, the dog would not make that final descent onto the sand; he was too frightened. It is difficult and precipitous so the only alternative was to retrace our steps up the cliff and back to Treen. The moral of the story is either to ask the way, or to take Roger and Jan's instructions with you in the car. I'll try Porth Kidney next time. 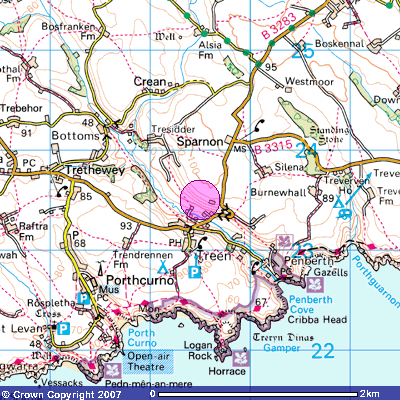 Return from Treen to Cornish Page