Having caught the ferry from Naxos we arrived in Koufonisia in the early afternoon. Judging by the way we had been greeted in Naxos we thought we would have no trouble in finding a room here. However, on arrival there was nobody waiting and just a minibus for the campsite at Charakopou. As this was a little out of town we decided to look for a room and were surprised to hear someone saying that all rooms on the island were taken. We decided to have a beer and asked in the bar and were told straight away where we could find a room. Problem solved. The room was close to the front, far cleaner than the one on Naxos and it had a terrace to sit on. 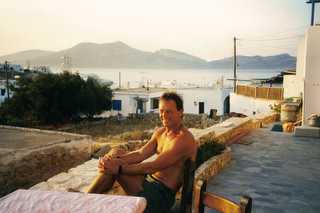 As time had gone on we decided to have a wander around the only town on Koufonisia, which is called Chora, and were eventually drawn into a bar (it didn't take a lot of doing) to watch some of the old locals playing backgammon. They were playing at an incredible speed and it was beyond comprehension. However, a really nice Australian girl working in the bar explained the rules to us and we were hooked. We've played many a game during our camping expeditions since then.That evening we had a lovely meal in one of the several local restaurants, despite the cook walking out after a row which was quite amusing! 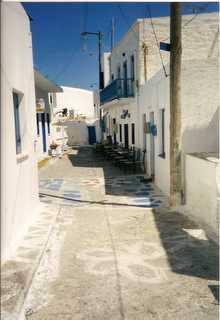 The next day we decided, for some reason, to go in search of the beach furthest away from Chora which is called Pori. It took something over half an hour to walk there across the island but it was a lovely walk and I decided to go for a run the next day. We loved it there. There were very few people and nearly all were naked. There were a couple of tents at the back of the beach belonging to wild campers and the whole feeling was very relaxed. After, perhaps, the most relaxing day of our trip so far we strolled back to Chora around the coastline. Koufonisia is reknowned for its spectacular coastline around here with its many little inlets and caves. We weren't disappointed. It really is stunning and the water is a beautiful clear blue, making it very popular with divers. 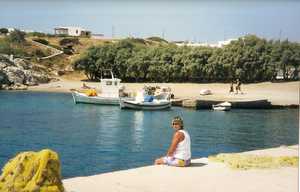 Also on the way back to town, and at the time unknown to us, we passed three other unofficial nudist beaches, Platia Pounta (the most popular), Phanos and Charakopou near the campsite. It was probably because it was getting late that we were unaware of any naturist activity and had no prior knowledge of them. 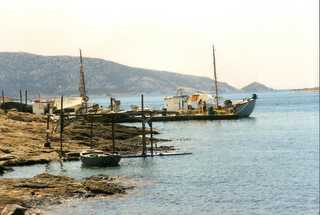 Although Koufonisia is the smallest island in the Cyclades it is also the most densely populated with somewhere in the region of three hundred people living there permanently. There is a thriving fishing industry here with seafood in abundance on the menus. Despite the fact that the population obviously increases somewhat in the summer it always seemed possible to find peace and, if necessary, seclusion here. 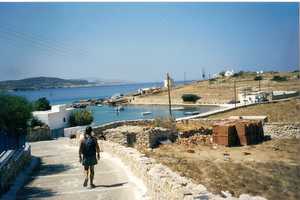 The town also has a very relaxing and peaceful feel about it with several bars and restaurants, a gift shop, art gallery and meandering streets that sometimes had flowers painted on them. We also found the locals very friendly. The Australian barmaid had arrived several years before and just decided to stay which, perhaps, sums up the locals attitude to strangers. Koufonisia is certainly an island to which we would like to return to discover the nudist beaches we missed on this visit. 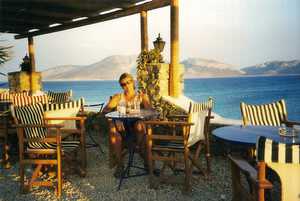 Anyway, after a couple more days of doing absolutely nothing, apart from the occasional run and lying on the beach, we decided to leave Koufonisia and move on to Donoussa which was an experience in more ways than one!

Return from Koufonisia to Greece