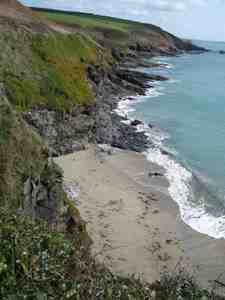 The first 'unofficial' naturist area of South Cornwall can be found in Mounts Bay at Kenneggy Cove, about four miles east of Penzance. Take the A394 for Helston and after driving through Rosudgeon you will see the Sports Club on your right. Turn right very soon after that into a lane marked 'dead end'. Continue down as far as you can until it turns rough and park in tight on the side of the lane.

Carry on by foot down the lane which narrows and you eventually reach the South Cornwall stretch of the coastal footpath. 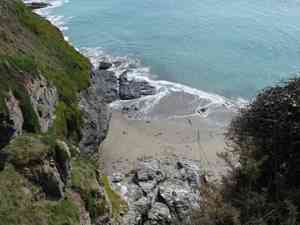 Turn left and continue along there until you see the steep path leading down to the beach. Access to the beach for the last two or three metres used to be by rope. I visited there on 16 March 2007 and access to the beach was closed and workmen seemed to be putting in some form of steps. This will obviously make access easier and the beach more popular. 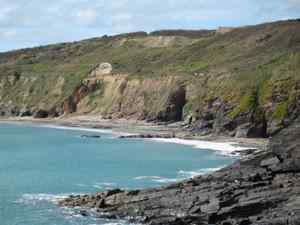 Once on the beach I used to head over to the left hand rocks. There is a little inlet there where I would naturist sunbathe, but with discretion. If this was not possible I would climb over the rocks to the left where it was always possible to naturist sunbathe. As with many beaches and rocks it is necessary to keep an eye on the tides. As this beach is tucked right in the heart of Mounts Bay and shelves gently it is one of the safer beaches to swim from. 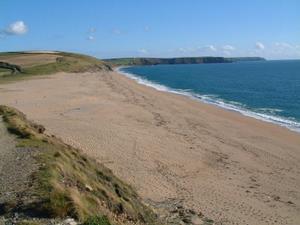 The next recognised 'unofficial' area in South Cornwall is on the Lizard peninsular side of Helston at Berepper. Head along the A3083 in the Lizard direction and turn to Gunwalloe whilst you still have RNAS Culdrose on your left. After parking at the end make your way right down onto the beach. This is at the far end of Loe Bar which is a notoriously dangerous beach to swim from. Take extreme caution! 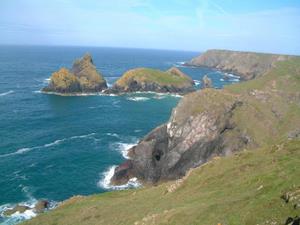 The coastline from here and around the Lizard peninsular is not really typical of South Cornwall. It is more rugged like the North Coast but it does hide away little coves. I have found several along this coastline over the years but there are none that I could particularly recommend. This is partly because of the danger of the sea along here and partly because of the difficult access.

I nearly got stuck once in a cove just past Mullion!

Moving on around the South Cornwall coast past The Lizard the next beach of note is at Gorran Haven just east of Falmouth. There are two possibilities here on either side of the village with Great Perhaver to the east and 'The Vault' to the west. The easiest access is certainly to The Vault where it is possible to park in the National Trust car park at Lamledra. Once on the beach move over to the right where it has been used regularly as an 'unofficial' naturist area.

Also near Falmouth, we have heard of Arthur's Beach. It's between Swanpool and Maenporth, Falmouth. Its a stunning spot, shingle/sand but off the beaten track, not well known but a haven for naturists.

Moving up the South Cornwall coastline you eventually arrive at Downderry, just past Looe. This has also regularly been used by naturists. Access isn't the easiest, which sometimes makes 'unofficial' naturist beaches even more appealing, and caution must also be taken of the tide times.

Local naturist, Tim, has sent us this report. 'Reading your piece about Cornwall, the naturist beach at Downderry is easily accessed from Downderry down the side of the school and turn left. There is even a small naturist Caravan/Campsite a few hundred yards up the lane opposite the school called Carbeil Naturist Park.'

Fellow naturist, Chris, has sent us a report of a beach in south east Cornwall at Portwrinkle, east of Downderry. It can be reached by parking in Portwrinkle carpark and walking west towards the main beach. Cross this and then go over the rocks where there is a sleepy, peaceful beach. The climb over the rocks can seem never ending but when you get used to it takes about ten minutes. Chris feels that Portwrinkle needs more naturists as some days he can be there all alone.

Another naturist contributor, Clive, adds 'I can confirm that this is a delightful little beach but it does have the drawback of being overlooked by the coast path.

A lesser know fact is that around spring tide low water it is possible to walk from this beach to Downderry along the foreshore, thus doing the trip naked is a real possibility. I have done this on many occasions but it does involve a bit of scrambling and a careful eye needs to be kept on the tide.

Rule of thumb is that if you can get off the Portwrinkle beach then the rest of the walk is OK.'

We hope that this has helped you in finding 'unofficial' naturist beaches in East and South Cornwall. Please let us know of any that we haven't mentioned that you would recommend.

A fellow naturist has contacted us about another spot ideal for naturism. Quite by chance, the area is shown on the map at the bottom of the page.

Hi Rog and Jan, Having just spent two days on the south coast of Cornwall, I thought I'd write and let you and others know of the beach I used. Midway between Perranuthano and Rinsey Head is the beach below the Acton Castle Hotel. I heard of it locally and decided to give it a go. It was delightful. It has three separate coves, two of which are cut off at high tide so you need to be wary if time is an issue. There are easily-climbable rocks above the beach if it is an especially high Spring tide. Swimming is only possible at mid to high tide although the first cove nearest the path down to the beach has the best swimming. The water is crystal clear and is great for snorkling. There are fantastic views from Higher Kenneggy to Tater Dhu near Lamorna. On each of the two days, the same naturists were present and there was no animosity at this stranger interloping on their beach. A fantastic place. To get there, take the lane marked Trevean off the A394 and just follow is down until you find a suitable parking place. Then walk down to the Acton Castle hotel, take the path which skirts the hotel and climb over the gap in the wire fence on the right. Walk down the grassy field to the coastal path, turn right and you will soon see a small path, on your left, down to the beach. Best regards. 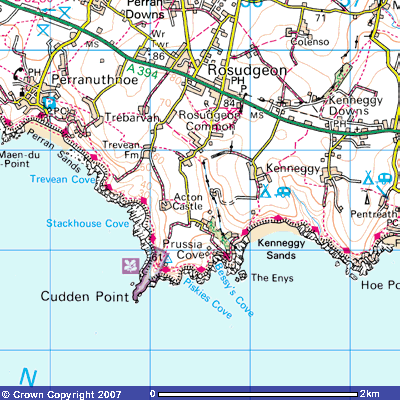