Jan had read about Donoussa before we left England and it sounded like our type of Greek Island, small, laid back and with a potential for naturist beaches. The ferry from Koufonisia arrived during the afternoon at Stavros, the main town of Donoussa and we were immediately met by a group of 'landladies' with rooms to let. Very few people left the ferry and we were virtually first being immediately met by a girl in her early twenties offering accommodation. We followed her into town, were shown the room which was fine and agreed a price. At this point I must apologise for the shortage of photographs due to our short stay on Donoussa. 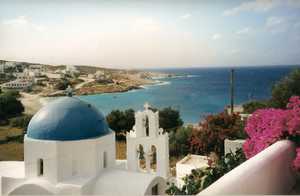 By the time we had showered it was time for a beer and something to eat and so we wandered down to the harbour and found a restaurant right on the main beach in town, Agios Stavros. It was quite busy, although we had not noticed any other English people, and so we settled down for a drink. Service was slow, which was fine, but the staff didn't appear particularly friendly and we were quite surprised to see our 'landlady' working there and who virtually ignored us. Anyway, the meal was fine and we went back to the apartment for a good nights sleep.

The next day we decided to walk up a long, newly made dirt track leading up into the mountain. Donoussa seemed particularly hilly for a small island. Soon after heading up and around the first big headland we looked down on a lovely beach called Kendros where there were some wild campers and signs of naturism. However, we had set ourselves a target and continued on our way.

We new that we were heading for a little hamlet called Mersini which was reported to have a fresh water spring. We eventually arrived there and had a lovely drink of cold, fresh water. Looking down from here we could see the beach of Livadi which we had heard had the potential for being naturist. We had also heard that a boat from Stavros may come to pick people up later on which was even better. 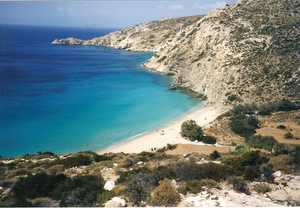 When we arrived on the beach all our expectations were met. The majority of people were naturist and we managed to establish that a boat would be arriving at four o'clock so we settled down for a great day.

We were a little surprised when most people started packing up and leaving the beach soon after three o'clock, particularly as there was a boat coming at four but didn't pay too much attention.

At four o'clock, almost to the minute, a small caique came chugging around the corner and headed into the beach to drop some people off. Jan and I were ready for it and, although dressed, I waded out, chucked my flip flops into the boat and grabbed the rope to hold the boat steady whilst the people got out. Jan then waded out, which we assumed was customary, and I hauled her in. We had just set off when I said to Jan 'Where's my flip flops' and almost immediately we saw them lying on the beach. The boat people assuming they belonged to the people getting off had chucked them out again. I now had to try and explain to the 'captain' that we had to go back to the beach to get them. He was not happy!

Of even more concern to Jan and I now was that we were now heading in the wrong direction, away from Stavros. We sailed around the headland and there on the jetty at Fikio were all the people that had earlier left the beach. They looked at Jan and I, dripping wet, in a mixture of disbelief and pity. We had not enhanced our reputations on Donoussa that afternoon. 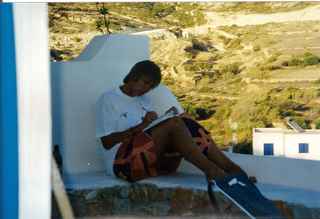 That evening Jan wrote the diary because I was in the middle of reading a book by a very good friend of ours, Bob Brown, who is an ultra distance triathlete and runner. He holds the record for running across America and is a great inspiration when it comes to training. Because of this I announced to Jan that I was going to run up the mountain to Mersini first thing tomorrow morning before it got too hot. That evening we went for another meal at the restaurant despite now having a slightly uneasy feeling about Donoussa.

At about seven o'clock the next morning I donned my running gear and, whilst Jan was still sleeping, set off up the mountain. Now those of you that run will know that running continually uphill isn't the easiest, but when you have a big headwind as well it's that much harder. Anyway, onward and upward I went, up the really windy (and windy) track until I came around a bend to see, about a hundred metres ahead of me, a herd of goats making their way up the track behind which were two donkeys. On the rear donkey I could see a hunched figure and at this point none of the goats, donkeys or figure had seen me. Thereby lay my first problem. When running you don't like to come up behind someone because it can give them quite a shock so I usually try to cough when some distance away to give them a warning. However, running into a head wind makes this twice as difficult and you have to get twice as close. Unfortunately I hadn't got within coughing distance when the rear donkey with the figure on it glanced over it's shoulder, saw me and took off. Even more unfortunate was that the figure didn't take off with the donkey and remained suspended in mid air for what seemed like minutes, before hitting the deck. 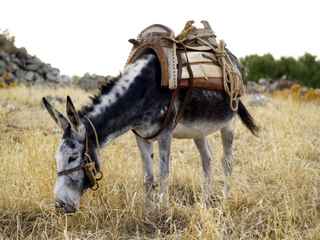 By this stage there were goats and donkeys running in all directions and a figure rolling about on the floor. I ran up to the figure to discover it was an old lady of about eighty who was groaning and obviously in a lot of pain. As my knowledge of Greek consisted of 'hello' and 'thank you' neither of which seemed particularly appropriate at this time I had to take action and after several minutes managed to get her to her feet. We now had to round up her goats and donkeys which, by now, were quite interested in proceedings. We eventually managed to get the goats into a field and she signalled to me that it would be a good idea for me to return down the mountain. My last sight was of her hobbling off up the hill in pursuit of two donkeys.

Despite a reasonable tan, by the time I got back to Jan my face was white and she immediately knew there had been a problem. We decided that today would be a good time to leave Donoussa and went straight down to the ferry booking office. There was no sign of life there and so we went for a walk to the north of the village along a goat track arriving at some huge cliffs. When we arrived back at Stavros and tried several times to find out about ferries but to no avail. Eventually the office opened and we were relieved to find that there was a ferry departing Donoussa that evening at 10.30p.m. and immediately booked our tickets. 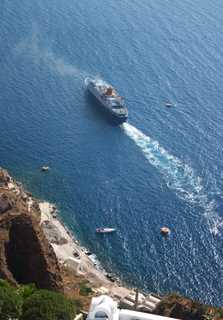 We then returned to the apartment and Jan went to pay for the room only to return saying that the girl was now asking for twice the original agreed amount. I then had to go to see her and explain that she was getting the agreed amount and not a drachma more.

By now Jan and I couldn't get off Donoussa quickly enough. We packed, went down to the quay, found another little taverna and had a meal there arriving at the quay in plenty of time to catch the ferry. Ten thirty arrived and there were a few people waiting but no sign of the ferry. It eventually arrived at 3.30a.m. by which time we had actually used our roll mats to try and grab some sleep which was impossible as we were half expecting the local 'mafia' to arrive to demand more money. Unfortunately, all these experiences combined to leave us with disappointing memories of Donoussa.

Return from Donoussa to Greece

Return from Donoussa to Homepage