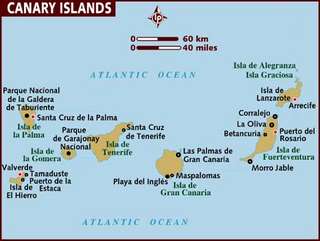 Being located just off the west coast of Africa, the Canary Islands are ideally placed for all year round climate suitable for naturist holidays. Throughout the year the average air temperature varies by only about 6ºC (17º-23º) with the water temperature averaging between 18ºC - 22ºC.

Of the seven largest Canary Islands, the four most visited are Fuerteventura, Lanzarote, Gran Canaria and Tenerife. 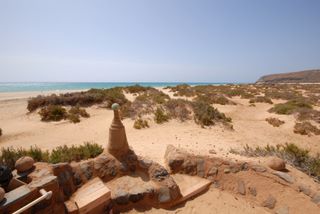 Fuerteventura is a very 'naturist friendly' island. In fact, in a recent survey for
“Bare Beaches” Fuerteventura was voted the world’s best naturist island.

The beaches to the south of Corralejo have been designated 'Natural Parks' and include the Corralejo dunes.

It is around this area, either side of the two large hotels, that the beaches are used by naturists. The clothes optional beaches stretch away for miles, especially to the south of these two hotels. There are small, circular stone shelters which give some privacy and shield from the wind (as seen in the photograph).

El Cotillo, with it's beautiful blue lagoons, is also very popular with naturists looking for an taste of real Fuerteventuran life in an unspoilt fishing village.

If you are feeling more adventurous, and have hired a four wheeled drive, The North Track, a rough road that runs between Corralajo and El Cotillo, goes past a number of beaches suitable for naturists.

Flights to Fuerteventura land near the capital Puerto del Rosario, and transfer to any part of the island takes an hour or less!

Most of the beaches on the island are used by naturists, in particular the more remote ones rather than the more populated areas.

If you fancy visiting the south of the island you will find the villages of Costa Calma and Morro Jable. The stunning beaches of Sotavento and Butihondo which join the two are awash with naturists. In fact, many naturists spend the whole day walking along the shore, stopping only for refreshments at one of the beach bars.

It is certainly worth checking out the many hotels on Fuerteventura. 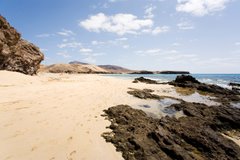 Lanzarote is the most northern and easterly of the Canary Islands, and as such enjoys the one of the best climates of the Canaries. Typically it is famous for its many extinct volcanos and lava fields giving it quite a unique appearance.

Its volcanic origin is also responsible for several tourist attractions such as El Golfo and the volcanic caves including the underground entertainment spectacle and auditorium at Jameos del Agua on the north east coast.

Lanzarote has one official naturist resort. This is Charco del Palo situated on the north east coast near the village of Mala. Papagayo beach (see photograph), is one of a number of naturist beaches and coves. There is a small entry via the newly created road to this beautiful National Park area.

Naturism is accepted widely on many Lanzarote beaches (away from the main tourist areas), in particular at Famara on the north west coast, around the Playa Quemada area and in the rocky coves between Puerto Del Carmen and Puerto Calero.

You have the opportunity to buy a luxury villa on Lanzarote!
Villa Elephante Blanco (Penas Blancas) is on the market but if you want to experience living there it is, at the moment, available to rent. 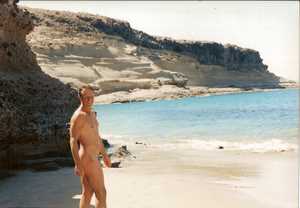 These two photos were taken a few years ago when Jan and I visited Tenerife, our first visit to the Canary Islands.

We stayed at a timeshare in Los Gigantes which, although not ideal for a naturist holiday, was west facing and had a very private balcony so was great for evenings.

We hired a car, which was essential, and during the days explored mainly the west coast of the island.

Flights to Tenerife arrive at one of two airports. In the vast majority of cases this will be the modern Tenerife Sur Airport, in the south of the island.

It is the main arrival point in Tenerife offering easy access to the main island resorts of Los Cristianos, Playa de las Americas and Costa Adeje. It will also be your arrival point if you're staying on the west coast near Los Gigantes or the smaller resorts to the south.

In Puerto de la Cruz, there are two hotels that have naturist areas for sunbathing. These are the Hotel Puerto Palace and the Hotel Dania Park Magec.
Also, in Playa de las Americas, the Dream Hotel Noelia Sur has a secure nudist rooftop terrace. 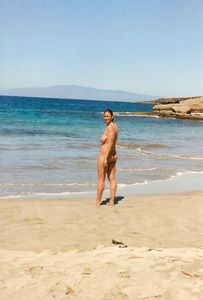 As we climbed around the rocks from La Caleta we passed a little encampment which was obviously quite established as they were raising pigs! The beach was bliss, very quiet, with just a few wild campers at the back.

There was very little information on naturist beaches at the time but it now appears that there are at least six recognised naturist beaches. It seems as though Tenerife could be worth serious consideration for a naturist holiday. 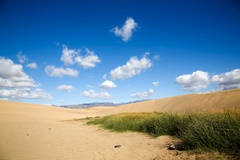 Gran Canaria, one of the largest of the Canary Islands, has a particularly well known and popular naturist area between Maspalomas and Playa del Inglés right down on the south of the island.

Maspalomas Beach is famous for its dunes (see photograph), an area particularly well used by naturists. Maspalomas Beach has the added benefit of being patrolled by lifeguards.

Please let us know of any naturist experiences you may have of The Canary Islands.