Cape Town
and Its
Naturist Attractions

Having never visited Cape Town, we are very grateful to our naturist friends for the following report on what sounds a wonderful area for sightseeing and naturism. 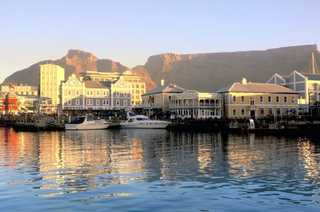 It is often said that Cape Town is the most beautiful city in the world.

Even though beauty is in the eye of the beholder this city will be a hard one to beat.

Now that Table Mountain in its midst has been crowned as one of the seven natural wonders of the world it is even harder to argue with its celebrated position as a top scenic city.

It is simply unimaginable that anyone who has not been to Cape Town before should visit Africa anywhere south of the equator without including a visit. She, who is fondly referred to as South Africa’s mother city, is indeed a ravishing beauty.

The combination of lofty mountains, sandy beaches, rocky cliffs and sea is sympathetically invaded by human spaces to form a coherent whole, immensely pleasing to the eye.

Even though it is incredibly difficult, nigh impossible to single out any particular area, it is the Atlantic seaboard on the western side of the Peninsula, from Table Bay driving south to Noordhoek, a distance of about 32km, that is regarded as being the most scenically magnificent. 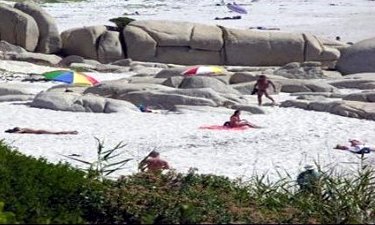 Not only is this stretch endowed with spectacular land and seascapes, it also boasts some of the most trendy beaches.

The four wind free beaches of Clifton, the sporty beach of Camps Bay, the exclusive Llandudno beach and the tucked away naturist beach, Sandy Bay are all here.

As Sandy Bay was once the subject of litigation between the state and a nude beach user, in which she was successful, the status of the beach as a nude beach is beyond doubt.

To get to Sandy Bay from the city, one takes Victoria Road the main coastal road heading south. Just before reaching Hout Bay one turns of towards the sea into Llandudno and heads straight keeping a look out for Sandy Bay Road on the right.

Here one turns down to the shore to park on the ring road, Sunset Avenue, where the footpath to the beach starts.  The walk of about 20 minutes is over fairly level terrain.

Llandudno and Hout Bay are the closest residential areas to Sandy Bay.

Residential holiday opportunities are rather limited in Llandudno but fortunately the same is not true of Hout Bay which offers a vast array of board and lodging establishments to holiday makers.

All tastes and pockets are catered for and here you will also find Sun Kissed Villa, a naturist accommodation establishment.  Contact can only be made through their website.

Not only is Hout Bay centrally located to all the popular beaches, it is only 20 minutes (less than 20km) by car from Cape Town and the V&A Waterfront, along the scenic Atlantic coastal route.

It is even closer to other attractions such as the Table Mountain cableway, Kirstenbosch Botanical Gardens and the Constantia Wine Route.

It can therefore be understood why so many foreigners, especially from Europe, choose Hout Bay to get away from the frosty northern hemisphere winter.

The beauty of Cape Town and the qualities from which it derives its status as a top class holiday destination is by no means limited to the city and the Cape Peninsula.  The historic town of Stellenbosch is only 51km away while Franschhoek and Somerset West are 82km and 50km distant respectively. 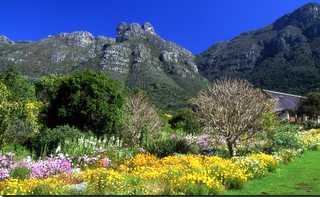 The south western corner is the only part of South Africa with a Mediterranean climate.

As a result, it gets its rainfall during the southern hemisphere winter

This is as opposed to the rest of the country that gets its rain mainly in summer.

As such Cape Town enjoys a high probability of warm and dry weather in summer making it an ideal summer holiday destination.  As regards the sea temperature around the Peninsula, somewhat different conditions prevail on the Eastern False Bay side and the Western Atlantic Seaboard side, respectively.

As a rule the former can be a few degrees, say up to four, warmer due to the fact that False Bay picks up the remnants of the warm Agulhas current that comes down the east coast of Africa.  The Atlantic Seaboard lies in the cold Benguela current coming from Antarctica.

Although Cape Town is often associated with cold sea water there is an upside to this.  Because of the cold water the humidity is relatively low in comparison with cities lying on warm oceans.